A study of the AREA 21 partners from Lublin about heat and electricity consumption habits in the local Energy Improvement District reveals interesting results and points at potentials for improved efficiency – in particular when it comes to heat consumption. In Wieniawa District, residents’ habits leave much to be desired in terms of energy saving. For instance, only 30 percent of them air their apartments properly, and fewer of them, that is 25 percent, turn off the radiator valves. 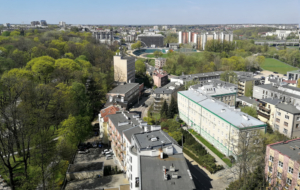 While residents are indeed familiar with a variety of energy saving approaches, the majority of them does not apply them on a daily basis. Thus, in addition to modern infrastructure, education of residents plays a major role to foster behavioural change. Those and many other interesting conclusions arise from the survey „Heat and Electricity Consumption Habits” conducted in January 2019 by ARC Rynek i Opinia LLC seated in Warsaw as procured by Lublin Municipality Office in co-operation with the Lublin Thermal Power Engineering Enterprise Joint-stock Company within the framework of AREA21. The survey aimed at diagnosing the habits of Lublin residents to the extent of rational consumption of energy and determining objectives of further educational measures.

Heat distributed through the municipal heat distribution network is the most popular and most dominant source of heat in apartments (90 percent), while elderly people (aged 75+) still often have individual coal burning stoves. Those living in single-family houses mostly lack modern heating systems. Almost all the residents in Wieniawa District (90 percent) confirm that they live in a thermally improved building and have modern window frames and thermal insulation (94 percent). Economic correlation is found here – the less income a surveyed household earns, the lower percentage share of them have window frames with thermal insulation.

Three of four respondents air their apartment at least several times weekly. Only 30 percent of the residents do it properly (keeping a window wide open for a couple of minutes and subsequently closing it). Almost a quarter of the respondents have the habit of turning off heaters while airing apartments. 25 percent of the residents confirm that they do it sometimes, whereas 51 percent do not have such habits at all. The majority of residents also knows that heaters must not be blocked out by furniture or thick window blinds. 72 percent say that no radiators are blocked out, while in 27 percent of apartments one or two heaters are blocked out.

Young people (18 – 29 years old) mostly underestimate the issue of energy saving on a daily basis. For instance, this group is mostly unaware of the average room temperature in their apartments and less frequently turn off heaters while airing their apartment. Moreover, respondents of this age group are often unaware of the technical condition of the buildings they live in.

Four out of five residents of Wieniawa District declare that they save electricity and attempt to reduce heating costs. People above 75 years of age are most willing about saving – as many as 90 percent attempt to reduce heating costs and electricity costs. Landlords seem to have a similar sensitivity, only 14 percent of them declare that they do not save energy in their apartments. On the other hand, one third of the younger residents (aged 18 to 29) do not actively try to save energy in their apartments. Interestingly, no significant correlation exists between the attitude towards energy saving and the respondents’ income.

When it comes to spontaneous responses, the energy saving method that has been ranked highest is electricity saving, while heat heat saving ranked fifth. While heat saving methods are known to the majority of people, a high percentage share of respondents do not use them on a daily basis.

The CAPI survey was conducted by means of interviews with people who gave their consents to be interviewed at their homes. The target group included Wieniawa District residents in Lublin, N= 410. The survey covered people meeting the following three conditions: domiciled in the area under consideration and were eligible for the survey; domiciled or rented the premises (the whole of it or one room), no other users in the premises took part in the survey. The survey was conducted in January 2019.

© Antti Mäkinen An AREA 21 Report on Good Practice ICT tools in Energy Planning
Scroll to top Do NOT follow this link or you will be banned from the site!