Kick-off event for the “Integrated climate protection concept for Wandsbek”

Hamburg has been engaged in climate protection initiatives for many years now and is very aware of its global responsibility as a major city. Its declared goal: Hamburg is to become a Climate Smart City. With this in mind, the Hamburg Climate Plan includes overarching urban development goals for the city as a whole that are defined in a way that takes climate protection into account, are considered in an integrated way and are regularly updated. However, when it comes to the realisation of measures aimed at climate protection, the focus is above all on the local districts and neighbourhoods. The individual districts of Hamburg are therefore being called upon to make increased efforts in the area of climate protection. 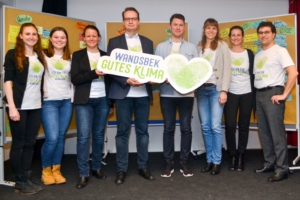 As a response to this, and in parallel to the INTERREG project AREA 21, the District Office of Wandsbek took advantage of a focal area for funding by the National Climate Protection Initiative of the federal government with their “Introductory Consultation on Climate Protection at Municipal Level” (09/2017 – 03/2018) which aimed for the first time to facilitate a structured attempt at engaging with climate protection on a municipal level. In the course of a six-month process, the whole district underwent intensive screening in order to identify promising opportunities and scope for taking action and to assess the potential in terms of climate protection, and to discuss these findings with relevant players from the business sector, local government and civil society.

Now the findings from the “Introductory Consultation on Climate Protection at Municipal Level” are being taken up on once again within the context of the follow-up project IKK-W, which was launched in February 2019 with the goal of designing a strategy document for climate protection in the district which will outline a framework and measures for the climate protection efforts of the District Office of Wandsbek for the forthcoming 5 to 15 years. As part of the participative approach to be used for the conception of measures, it is intended in particular that collaboration with AREA 21 will also be intensified, in order to consolidate and further develop networks, provide support in the strategic EID planning in the workshops, and finally to embed the EID implementation plans into the overarching district plan.

Under the slogan “Actively shaping climate protection in the local neighbourhoods of Wandsbek”, the IKK-W kick-off event was held on 27.03.2019 in the ‘Kulturschloss’ in Wandsbek. At the invitation of the Wandsbek District Office, around 45 representatives from the world of politics and local administration, from businesses and initiatives and from the local population came together to collect and discuss opportunities as well as obstacles and challenges with regard to the implementation of climate protection measures in the district of Wandsbek. Two individuals active in the Wandsbek district, businessman Wolfgang W. Springer (Springer Bio-Backwerk GmbH & Co. KG) and the climate protection consultant Michael Liebert (Gut Karlshöhe Environment Centre) presented their experiences as well as the prospects for their efforts in respect of climate protection.

The participants collected and discussed some initial ideas and themes to be addressed. For example, various measures and possible ways to increase cycling and to offer financial incentives to encourage private car-sharing, new technology for climate-friendly energy supply in new buildings, and dealing with the increasing sealing of areas of land. In addition, there was a request that sports and citizens’ associations in the district should be involved in the further process, likewise those initiatives that are already actively involved in climate protection work. The limits of the possible impact of district-level climate protection were also addressed, however – it was pointed out that in order to reach climate protection goals a serious change of course is first of all required on an international level, as well as on a national and state government level.

Following the kick-off event, things will now press ahead – in order to develop the integrated climate protection concept, the local areas and neighbourhoods of the district will now undergo analysis to find potential in terms of climate protection, looking in particular at the following issues:

To answer these and further questions, the project team will be busy working on the ground in the coming months in the various local neighbourhoods within Wandsbek. In collaboration with district and cultural institutions and local associations and organisations, potential areas for the implementation of climate protection measures in the Wandsbek local neighbourhoods will be sought and developed.

© Lublin City Office Visioning for Wieniawa EID, Lublin: Alignment of different perspectives along...
Scroll to top Do NOT follow this link or you will be banned from the site!