Beyond AREA 21: Smart district heating reduces the carbon footprint and costs of buildings in Tampere

In our partner city Tampere, the AREA 21 activities are integrated into a larger strategic context. Against this background, the city engages in several projects and initiatives aiming at promoting the city’s energy transition. One of these projects is STARDUST, which recently tested a smart district heating service. Residential buildings can reduce their energy consumption by focusing on district heating and harnessing artificial intelligence. Residential buildings of the Tampere Student Housing Foundation (TOAS) have achieved savings of up to 10 per cent by using the smart district heating service of Tampereen Sähkölaitos. Algorithms are also being developed for other types of buildings, such as offices and schools. 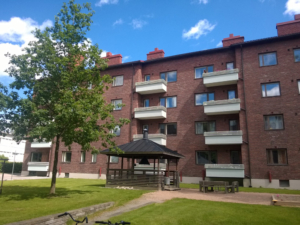 The smart district heating service of Tampere Power Utility has been developed by Tampere-based Enermix Oy. The service balances peak district heating outputs, optimises the need for heating in buildings, and in this way reduces heating costs. The service includes apartment-specific sensors that measure the temperature and humidity. They help to control heating based on room temperatures. As a result, artificial intelligence (AI) controls heating according to needs during different times of the day and year.

For example, AI prevents any unnecessary heating during summer, even if a few colder hours otherwise requires it. When the days get colder in autumn, heating does not need to be switched on at once, as heat is stored in building structures. Consumption peaks can be avoided by temporarily decreasing heating during high consumption of district heating, such as in the morning when people often take a shower.

Service developed together with TOAS

The smart district heating service was tested in 11 TOAS buildings during the previous heating season. The service made it easier to identify any faults in the heating system or any vacant apartments with a window left open when moving out.

Various energy-efficiency measures had already been carried out in the tested buildings. However, the smart district heating service, with its different sensors, was able to cut down energy consumption by 5 to 10 per cent, without making any compromises over living conditions.

“In addition to financial savings, temperatures have remained more even during the heating season and faults have been detected and corrected more easily”

The service is still under development to also use it in other types of buildings. New test projects will be launched in buildings of the city and the Evangelical Lutheran Church. The operation of the service will also be monitored in TOAS buildings. “The service is most beneficial if a building has not previously had any smart heating control or room temperature measurements”, Koski says.

TOAS aims to lower its carbon emissions to zero. Through its energy savings, TOAS participates in the universal climate campaign, but it has also set significant goals for new buildings. For example, TOAS will build a wooden apartment building in Rauhaniemi.

“Building owners play a significant part in us, together, being able to become carbon neutral by 2030”

The smart district heating service has been developed as part of the STARDUST project. The aim of the project is to develop low-emission and energy-efficient ICT solutions for electric transport, smart outdoor lighting, demand response for building heating systems and energy production in new residential areas. Further information (in Finnish) is available here.

In the coming weeks we will present key info on our pilots to show what we are doing and hoping for but also what risks we face. Stay tuned for our 4 EIDs Q&A..

Find the recording and materials from the Webinar: UBC TALKS about low carbon energy solutions in cities incl. A21+ contribution here: ubc-sustainable.net/… via @UBC_Sustainable

© SPbPU 18th ed. of the Strategic Planning Leaders Forum of the Regions and Cities of...
Scroll to top AREA 21